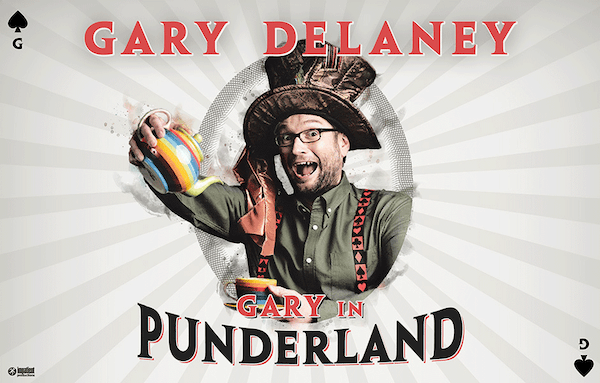 This event has no more tickets remaining

If we know of a trusted online shop with tickets available, we will always provide a link to buy from them.

The wait is over for the return of Britain's best purveyor of punchlines, Gary Delaney, on a warm-up run of his new tour show of the sharpest one-liners ever made.

Between stealing the show on Mock the Week and Live at the Apollo, Gary extended his last tour show Gagster's Paradise for a full extra year, leaving howling audiences across the country in hysterics.

Now is your chance to experience the comedy world's favourite gag machine work in a new show at a venue near you.

Gary Delaney is a razor sharp one-liner comedian, who is widely regarded as being the most quotable comic on the circuit. The high quantity of stand out gags leaves the audience struggling to remember them all. He regularly plays all the big clubs including The Comedy Store, Highlight, Jongleurs, Komedia, Glee, Rawhide, The Frog and Bucket, Hyena, Baby Blue, The Stand, Comedy Café, Lee Hurst's Backyard, Banana Cabaret and headlines at clubs throughout the UK. Gary is a regular guest on Mock The Week and has also appeared on Dave's 'One Night Stand', Comedy Central's 'Comedy Blue' and on Channel 4's 'Robert's Web' as well as Radio 4's 'Loose Ends' and Radio 2's 'Russell Kane's Whistle-Stop Tour'. His debut show 'Purist' was a big hit at the Edinburgh Festival in 2010, selling out every night and receiving many four and five star reviews. 'Gary Delaney has more quality jokes in this hour than many comics have in their entire careers… Quite brilliant' (The Scotsman). 'I laughed and I laughed and I laughed! A master craftsman' (The Times) 'Taut, brilliant one-liners. Delaney was worth the price of admission alone' (Chortle) '... Razor sharp one-liners' (The Daily Telegraph) Gary Delaney was #5 in Ents24's Hardest Working Comedians of 2018 list.