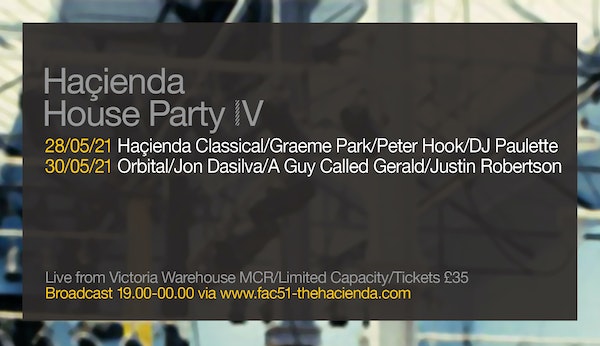 This event will be streamed online

Dance music is too narrow a term for the genius of the Hartnoll brothers. Capable of both rib-shaking, energetic techno and incredible multi-layered ambient soundscapes, and blessed with a godlike genius when it comes to their DJing sets, Orbital have succeeded Kraftwerk as the Kings of techno and electronica.

One of the country's top dance DJs who made his name at Manchester's famous Hacienda club.

Storming drum'n'bass merchant who was known in a previous life as one of the late 80s / early 90s Godfathers of acid house and ambient techno, and the man responsible for dancefloor classic 'Voodoo Ray'.

A legend of the music scene. Schooled on the Hacienda dancefloor, Justin is a man in demand, regularly found rocking dancefloors across the globe. Over the years, the former Lionrock mainman has remixed such luminaries as Manic Street Preachers, Bjork, New Order, Felix Da Housecat, The Stone Roses, Stereo MC's and Chemical Brothers. His 2001 Revtone album saw Justin throw another sound curveball, taking its cue from the disco-fied New York sound of late 70s Talking Heads, weaving in melodic techno influences to create an intriguing new sound. More recently he has enjoyed great success and a new generation of admirers with the moniker The Deadstock 33s. Everything he touches turns to gold.